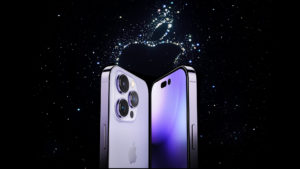 We tuned in to Apple’s latest announcements at their “Far Out” Event so you didn’t have to.

First, the regular iPhone 14 isn’t a radical change from previous years, even if the new iPhone 14 Plus has a bigger 6.7-inch screen. The iPhone 14 offers a new front camera with autofocus, an improved camera system, longer battery life, and a new action mode for extremely smooth video capture. It still has the notch, but it’s a vastly improved phone and promises the best battery life of any iPhone yet.

The notch is the most significant change to the iPhone 14 Pro and Pro Max. It moved. With this new phone, Apple’s notch is smaller and rounded, and the company is calling it the “Dynamic Island” because iOS 16 makes full use of the notch. Apple essentially turned the notch area into a notification center, which is pretty clever.

All four new iPhone 14 models, along with the new Apple Watch Series 8, all have a new crash detection feature that’s pretty amazing. Thanks to new sensors, internal microphones, gyroscopes, and accelerometers, these devices can detect when you’re in a crash and instantly alert primary contacts, emergency services, and more. Below are the current price points of each model.

As expected, Apple also debuted a new and improved Watch Series 8. At a glance, the Apple Watch 8 looks very similar to its older sibling, but on the bottom and insides, there are several new tricks.

For starters, the Apple Watch Series 8 has two new temperature sensors for health, fitness, and ovulation features. It also has the same sensors as the iPhone 14 for crash detection, plus a host of other goodies.

Apple Watch Series 8 will start at $399 for the GPS model or $499 for the GPS + Cellular watch. Like the new phones, shipping begins on September 16th.

Finally! Apple made the watch everyone wanted, and while the new iPhone is fantastic, the Apple Watch Ultra is an all-new product. Take everything you love about the Apple Watch, then make it better and more rugged, then throw in all kinds of neat software to take full advantage of its good looks.

We’re talking about a titanium frame that fully protects the brighter sapphire crystal-covered screen, a louder speaker, and even new sports-focused bands, such as a woven looping band called “Alpine” for climbers, and a band that’ll fit over a wet suit.

The Apple Watch Ultra has a larger digital crown with deeper grooves that’s easier to use, even with gloves on, plus there’s a dedicated “action button” to instantly launch workouts, cycle tracking, water-diving features, and more. It’s louder, thanks to a second speaker that doubles as a loud 86db siren that will help people find you in an emergency.

The Ultra is even certified for “recreational scuba diving” and can dive to depths of around 130 ft, while showing you your water depth on the display.

The Apple Watch Ultra looks pretty awesome. That said, it’s an eye-watering $799, and you can get your own starting September 23rd.

Apple’s new AirPods Pro comes with the same overall design, only now offering a new SX ear tip option for those with smaller ears. Aside from the looks, everything else changed on the inside and with the charging case. The most notable upgrade is double the active noise cancellation (ANC), which should put them on par, and maybe even beat, the current competition.

The new AirPods Pro 2nd Generation offers double the ANC, promising to help prevent noise from the outside world from interrupting your music or podcast. A new “Adaptive Transparency” mode will let you hear the outside world when needed yet still block extremely loud noises like a passing train.

These new Pro buds have personalized Spatial Audio, conversation boost mode, and the controls on the side are now capacitive touch, so you can slide a finger down the casing to increase the volume. And finally, the AirPods Pro 2nd Gen charging case now works with Apple Watch chargers, has a built-in speaker to help you find a lost or missing case, and even has a lanyard loop.

Apple’s new AirPods Pro will cost $249, and you can order them starting September 9th. Then, they’ll officially be available on September 23rd.